Edit
watch 02:52
Roblox: DeepWoken - The Loop
Do you like this video?
Play Sound

November 17, 2009
Tony Hawk: Ride, or THR, is a spin-off of the Tony Hawk video game series. Systems that the game appear on are the Wii, PlayStation 3, and Xbox 360. The Xbox 360 and PS3 versions of the game was developed by Robomodo. The Wii version was handled by Buzz Monkey. The game was published by Activision and distributed by Activision Blizzard.

The game was rated ESRB T for teen and PEGI 12, and was released on November 17, 2009. Online multiplayer and online leaderboards were available in the PlayStation 3 and Xbox 360 versions.

On December 3, 2008, Activision announced a new motion sensing balance board peripheral that players will "put down the controller, step on the board, and feel the sensation of going big... Shift your weight to turn and balance grinds, kick back on the tail of the board to ollie, and lean into airs to pull off huge spins."

On GameTrailers TV on Friday 15 of May, 2009, it was announced that the game will not be called "Tony Hawk's Adrenaline" (the game's working title), but instead, "Tony Hawk: Ride", as it's official name.

On October 8, 2009, it was announced that players could visit their local GameStop retailer and see the skateboard controller, which was mounted on a rack with a Tony Hawk: Ride advertisement. The board was not removable, but was allowed to be touched.

In Tony Hawk: Ride, players use the all new skateboard-based peripheral to simulate the riding of an actual skateboard in the gameplay. Players cannot play the game with a hand controller. This is considered the most dramatic change in the Tony Hawk video game series due to the fact that in the gameplay of past games, a lot of "button mashing" was used. There are three levels of difficulty while using the skateboard controller, which are "Casual", "Confident", and "Hardcore".

Various of past installments of Tony Hawk games, from Tony Hawk's Underground to Tony Hawk's Proving Ground, made it available to players to get off their skateboard during gameplay and start walking. Walking is no longer available in Tony Hawk: Ride.

The story mode of the game is called "Road Trip", were the player's Custom Skater starts in Southern California and travels through the world eventually going pro. The story mode can be both short or long, depending on which difficulty it is played in.

Online play is available in the PlayStation 3 and Xbox 360 versions. The Wii version doesn't have online play but instead substitutes that for the use of Miis, so players have the option to play the game with their Mii avatars, pre-determined Miis in the game based on the pro skater cast, or the regular pro skater cast. All three versions of the game match up the same, except for the lack of online play on the Wii version.

Before the release of Tony Hawk: Ride, the developers of Tony Hawk: Ride, as well as Tony Hawk himself, were asked by video game critics and video game journalists if the game would feature a open world without any loading times in between, they said the game would not be featuring an open world to skate in because if players were on the skateboard controller for hours, just looking for something to do, players would get bored and eventually stop playing the game entirely. Therefore, the game features more enclosed levels.

Besides the pro skaters, there is also the option of creating your own skater. 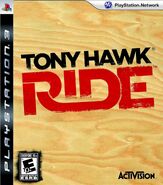