Tony Hawk's Proving Ground, or THPG, is the ninth installment in the Tony Hawk's series developed by Neversoft for the PS3 and Xbox 360 video game consoles; by Page 44 Studios for the PS2 and Wii; and by Vicarious Visions for the Nintendo DS. Online play was included in the Nintendo DS, PS3, and Xbox 360 versions of Tony Hawk's Proving Ground. It is the final game in the series to be developed by Neversoft, as the franchise was then replaced by Robomodo. It was released in October 15, 2007. It was also the last game of the main series of Tony Hawk games for 8 years until Tony Hawk's Pro Skater 5 in 2015.

Career skaters are the ones who make skateboarding look easy . Career skaters get Nail-The-Trick, Nail-The-Grab, and Nail-The-Manual (Nail-The-Manual is not present in the PS2 version, Wii version or the DS version). In TH's Proving Ground you are trying to get a team or earn skating spots or even making a shoe deal while in career mode.

Rigger skaters are the ones who use their environment to make skate ramps, rails, etc. Riggers can add new pieces to skate on to the environment with the Rig-A-Kit as well as have improved abilities of climbing and break & enter.

Hardcore skaters are the ones who do it for the love of the sport, and don't care for the media coverage. They get the Aggro moves which include Kick and Push. They can also "skate-check" pedestrians.

The Nintendo DS verison of Tony Hawk's Proving Ground was developed by Vicarious Visions. In it's story mode, you are working towards becoming a career or hardcore skater. To do this you must complete different goals. These goals are career, hardcore, and neutral goals. After completing these goals you earn money which is used to fix up your skate park. Eventually after you complete enough goals, you get to meet a pro-skater. This pro-skater always has a goal, and after completing that goal you move on to the next level.

Online multi-player is no longer available despite using friend codes or not. The company behind the DS version has closed down the THPG DS community, although, the online THPG DS community website is still up. 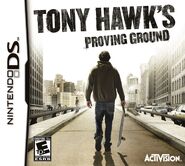 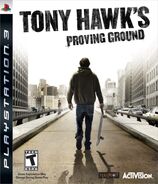 Retrieved from "https://tonyhawkgames.fandom.com/wiki/Tony_Hawk%27s_Proving_Ground?oldid=15586"
Community content is available under CC-BY-SA unless otherwise noted.