Start a Wiki
Tony Hawk's Project 8, officially abbreviated as THP8, is the eighth installment in the Tony Hawk's series of video games. It was released on sixth-generation (PlayStation 2 and Xbox) and seventh-generation consoles (Xbox 360 and PlayStation 3). The name Project 8 refers to the "Project 8" competition featured in the storyline, and because it is the eighth game in the main series of Tony Hawk games. It was released in November 7, 2006.

Project 8 features one giant streaming city to skate in (only on the Playstation 3 and Xbox 360), which contains various skateparks and "hidden sections". An E3 preview by a member of the PlanetTonyHawk.com staff stated "The levels are massive and an amalgamation of just about every level in the early THPS games. So Suburbia, School, Downtown and Factory (I, II and III) are all interconnected and part of the same town." There are about 45 skaters in the game, including unlockable characters, who each have a unique mo-cap style (only on the Playstation 3 and Xbox 360), providing a different experience and no recycled animations. One of the new features is the 'nail the trick' option. When a player enters this mode the camera will zoom in on the side to focus on the skateboard and the characters feet. Players will then be able to use the right analog stick to control the right foot and the left analog stick to control the left foot, allowing the player to flip and rotate the board in any such manner; including tapping the underside of the board in the air and merging various techniques to form new moves. Another new ability in the game is to control the characters in the game during crashes, allowing you to obtain a high "Hospital bill", with bonus money awarded for broken bones - this feature is used in numerous challenges across the story mode (only on Playstation 3 and Xbox 360). Players can also induce a wreck manually in a way very similar to Thrasher: Skate and Destroy on the PlayStation. Lastly, players still have the option to get off their skateboard at any time and run, though it plays a very small role in the game overall, other than avoiding bails and extending combos.

Project 8 is available in three distinctly different versions: The first version is the one created by Neversoft for the current generation game consoles, the Playstation 3 and the Xbox 360. The Xbox 360 and Playstation 3 games do not use the universal cheats. The second version was created by Shaba Games for the previous generation game systems, the Xbox and the Playstation 2. Some features were left out or redesigned to suit the limitations of the older game systems for the Shaba version. Notable changes/exclusions in the Shaba version include isolated levels selected from the menu rather than one large interconnected level, fewer options for create-a-skater, same kind of gameplay as the the past few games (Underground, Underground 2 and American Wasteland), and both the new stat upgrade system and skeletal animations are not included in the Shaba version. Also some of the goals are different between the next generation consoles and the older systems. The third version was created by Page 44 Studios for the PlayStation Portable. In the PlayStation Portable version, "nail-the-trick" is used with the face buttons. The PSP version also has extra classic levels from previous Tony Hawk games.

Version differences in the levels 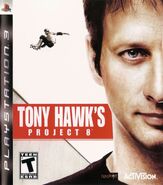 Retrieved from "https://tonyhawkgames.fandom.com/wiki/Tony_Hawk%27s_Project_8?oldid=15580"
Community content is available under CC-BY-SA unless otherwise noted.