The game is being developed by Robomodo, and is being published by Activision. The publishers have said that the game will cost around $15.

Classic Mode will see its return in this series with seven levels from Tony Hawk's Pro Skater and Tony Hawk's Pro Skater 2. As of right now, the only confirmed levels are the Warehouse and School 2 from THPS2. The game will feature updated controls, so manuals and reverts will be present even on the early levels.

Classic missions such as S-K-A-T-E and Secret DVD (modernized from the Secret VHS tape) will return with many other missions.

Online play has been confirmed, but no other details have been announced since then. The number of players, game modes, and levels have yet to be released.

The final levels list hasn't been revealed yet. More levels will be announced soon. 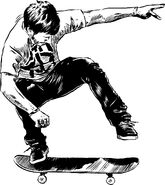 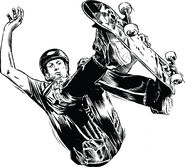 Retrieved from "https://tonyhawkgames.fandom.com/wiki/Tony_Hawk%27s_Pro_Skater_HD?oldid=6059"
Community content is available under CC-BY-SA unless otherwise noted.