December 15, 2015
Tony Hawk's Pro Skater 5, or THPS5, is the 10th major title for the Tony Hawk game series being developed by Robomodo. It was released on September 29, 2015 on the PlayStation 4 and Xbox One, and was released on the PlayStation 3 and Xbox 360 on December 15, 2015. As indicated by the title, it is meant to be a return to the series' roots. It is the first time a main Tony Hawk game is developed by Robomodo.

THPS5 is made using the same engine as THPSHD, Unreal Engine 3, hence derived most of the controversial contents including physics, animations and bail fadeouts. The gameplay itself became faster. It is confirmed that the game will include powerups and shooting projectiles. An obvious upgrade is multiplayer mode, that follows modern standards.

In November 2014 Tony Hawk revealed that there is another title in works to be released in 2015 on PS4.

On April 9th Tony Hawk's caterer uploaded a photo on Instagram, leaking the Tony Hawk 5 logo. Activision spokesman had to confirm that this is the working title for the upcoming game.

In a May 5th, 2015 article, Game Informer revealed that Activision and Robomodo were indeed working on Tony Hawk's Pro Skater 5, an official successor to the original Tony Hawk's Pro Skater series. The game is slated to release on Xbox One and Playstation 4 later this year. PS3 and Xbox 360 versions are scheduled to arrive soon after.

The game will feature a new set of levels, each sporting a set of missions to be completed by the player to unlock new characters and items, like in the original series. The game was also announced to have an online mode. Players can expect to play competitive and cooperative with friends online. Character development will be seamlessly integrated between online and offline modes.

It was later revealed that the last-gen versions will only be available to the UK game retailer GAME.

At the demo for THPS5, we were shown some of the new ways the game is changing, for the better. Players can now push off with their feet, allowing them to slowly coast around areas, instead of trying to jump around or use other unusual mechanisms to maintain speed. Secondly, normal grinding has been replaced with a new Slam feature. This ability has you dropping to the ground quickly, and if there is a pole or other grindable object beneath you, your character will grind on it.

Another new feature is the dedicated online. When loading up the game, you are placed in a world with other skaters, whom you can ignore if you wish, or play missions and compete in events with them at any time. Along with this, Create A Park mode returns with all new features so you can design and share creations with friends online. The king of the vert ramp returns in this revival of the blockbuster THPS skateboarding franchise.

This game has been confirmed to be a return to console platforms, but exact release plans and gameplay details have yet to be revealed. Please check back for official info.[1]

The vanilla game at the release date was reported as unplayable. It only allowed to skate the initial level. Original game files occupied 4.3GB of disk space, while the size of the patch itself was 7.6GB.

The game recieved extremely negative feedback. Metascore is giving the PlayStation 4 version of the game 33/100 basing on 28 critics, while user score for the game is 1.6/10 basing on 274 reviews (as of October 10th, 2015)[2]. The game is being criticized for the new mechanics including slam feature and new special bar functionality, poor level design and broken game physics, which didn't change much since THPSHD. Eurogamer published a video called "Tony Hawk's Pro Skater 5 is a glitchy mess", showing the glitchy physics of the game. It has over 800k views[3]. 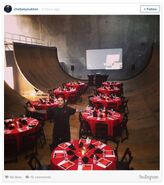 Tony Hawk 5 leak
Add a photo to this gallery

Retrieved from "https://tonyhawkgames.fandom.com/wiki/Tony_Hawk%27s_Pro_Skater_5?oldid=15970"
Community content is available under CC-BY-SA unless otherwise noted.