January 1, 2003 (US)
Tony Hawk's Pro Skater 3, often called THPS3 or Tony Hawk 3, is the third video game in the Tony Hawk's series. It was developed by Neversoft and published by Activision (SUCCESS Corporation in Japan) in 2001 for the Nintendo GameCube, Game Boy Color, PlayStation 2, and PlayStation. In 2002, it was published for the Nintendo 64, Xbox, PC and Game Boy Advance. It was the first game released for the PlayStation 2 supporting online play, and the last game released on the Nintendo 64 in the United States.

The game was unusual for having advertising in the form of billboards; while the previous games in the series featured advertising, non-skating brands can be seen for the first time (since the level Downhill Jam in THPS1). Such brands include Taco Bell, Nokia and Jeep.

Bob Burnquist is absent in this game, due to his appearance in another skateboarding video game, ESPN X Games Skateboarding, during that time of year, although he would return in it's sequel.

The game stood out in the franchise for being the first title to have online capabilities. Users could connect directly to other players online on the PlayStation 2 version—even prior to the launch of the network adapter, with a USB Ethernet adapter, or on PC, where one could use the GameSpy lobby to play online, or simply play LAN on a local area network. The original Xbox version lacked online support completely, but players found a workaround in the form of System-Link bridging.

THPS3 saw the introduction of the Revert - one of the most influential moves in the series, a trick that enabled vert combos to be tied together with a manual by tapping a button when landing in a quarterpipe. This allowed for much longer combos than in the previous two games, where landing in a quarterpipe would finish a combo.

Hidden Combos are variations of standard tricks that can be performed as flip, manual or grind tricks. For example, double-tapping the flip button would, naturally, make the skater perform a double flip. However, the number of extra tricks are limited and take more air time, making it impossible to land them in flatland. This system would later be refined in THPS4, where these variations known as double-tap tricks and manual/lip/grind extensions. An ability that was cut out in following games were flip-grab blending tricks. (i.e. a Kickflip could be easily transformed into a Kickflip to Indy or Kickflip to Crail).

THPS3 introduced a balance bar for lip tricks. Balance meters for grinds were introduced in the GBA and Xbox versions in THPS3, but the lip balance meter was still non-existent. Also, the skater could ollie from the lip trick, giving the ability to ollie, and then perform a flip trick to revert to keep their combo going nicely.

THPS3 does not feature the Big Drop mechanic, which was introduced in THPS2. The Big Drop remained in the PS1 and N64 versions, due to those versions still using the Apocalypse engine. The PS1 big drop icon was changed in THPS3, whereas the N64 version recycles the THPS2 design. Later games in the series would eventually remove the Big Drop mechanic altogether until it's return in Tony Hawk's Pro Skater HD.

THPS3 would be the first game in series to introduce pedestrians located throughout the levels.

THPS3 was the first game in the series where the player could create custom female skaters, as opposed to being limited to male skaters in THPS2. This feature would later carry over to Tony Hawk's Pro Skater 2X.

Control Zone is a multiplayer game type, exclusive to THPS3. Despite being a rather popular online mode, it never saw its return in subsequent games.

GBC only, cancelled for other platforms

The game has sold 2.4 million copies worldwide. The game was very well received by the gaming press, the PS2 version earned a rare perfect 10 score from Gamespot, the fourth game of sixteen to ever receive said score. It was also awarded the best sports game award at the 2001 E3. IGN rated the game 9.7/10, and ranked it #21 in the Top 25 PS2 Games of All Time. The game is currently the top rated PS2 game on the review aggregate website Metacritic, with an average score of 97/100, tying with Grand Theft Auto III. 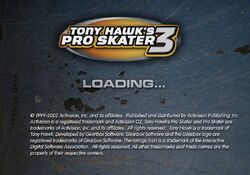