Template:GameTony Hawk's Pro Skater 2, often called THPS2, is the second game in the Tony Hawk's series. It was developed by Neversoft and published by Activision in 2000. It was first released for the PlayStation, with subsequent ports to the Nintendo 64 (by Edge of Reality), SEGA Dreamcast (by Crave), Game Boy Advance (by Vicarious Visions), Mac OS9/X, Dell Axiom PocketPC (By Aspyr) and the Windows PC (By Gray Matter Interactive). It was also released for the Game Boy Color, and was better received than the first installment on that machine. In spite of that, it still bore little resemblance to the other versions of the game. The Game Boy Advance version, however, was highly applauded for translating the style and sense of the game accurately into an isometric (pseudo-3D or 2.5D) game. On April 1, 2010 a remake (downscaled from the PC version) for iOS devices was released.

It features the series' trademark open-ended gameplay, in which the player (playing as a professional skateboarder) completes a number of missions which result in cash rewards. With money gained, the player can then purchase skill improvements and better skateboards. It was the first of the Pro Skater games to feature Create-a-Skater and Park Editor features, now a staple in the series.

Some levels in Tony Hawks Pro Skater 2 are designed for the player to complete a set number of tasks in two minutes. Such tasks include finding the S-K-A-T-E letters, high scores and finding a hidden tape somewhere in the level. Each of the non-competition levels contain ten tasks for a player to do. The other type of levels are competition levels.

THPS2 focused a lot on skater stance so now player had the ability to toggle Nollie and Switch, which affects trick score. Switch toggle animation looks like somewhat that will be known as Revert later.

While balancing in a manual, player can see a balance bar. However, rail and lip didn't provide this.

From now on, skater is allowed to setup his tricks, including signature moves known as Specials. More lip tricks were added. All tricks are customizable, except grinds.

These tricks require skater to press the direction twice and then the trick button, thus limited to 4 tricks per trick type. Grind tricks only featured 2 directional double tap tricks: Down+Down+Grind - Bluntslide and Up+Up+Grind - Nosebluntslide. Lip tricks do not have this modification.

Default grind tricks are predefined in THPS games and in THPS2 it took its final form, introducing Feeble, Overcrook, etc. which will remain as default on-wards.

Every goal in career mode is awarded by some amount of cash. Also some collectible cash icons are located all around the levels. There is Tony Hawk's photo on the cash icon. Player is allowed to spend it on stats, tricks and boards. Maximum legal cash amount is $150,000. However there is a cheat that gives $900,000 to every skater. Cash system will see its return in THPS4.

This feature allowed to create player's own basic skatepark. It also came with a bunch of pre-made levels by Neversoft.

In South Korea, in order to make the game more appealing, The pop band FIN.K.L. were featured as playable skaters. Lee Hyo Ri, Ock Joo Hyun, Lee Jin and Sung Yu Ri are playable and 8 additional songs, from FIN.K.L. were included into the main soundtrack, on top of the original songs. The FIN.K.L logo was also to certain objects, if you played as one of the members.

Completing the game with one of the members is impossible. The game will crash after the final gold medal.

The game is fully English.

In Japan, the game is fully translated on PC. The Japanese Playstation version, which is the only other release in Japan, is fully English, but swaps CROSS with CIRCLE, to blend with their customs.

This is flip flopped with Matt Hoffman's Pro BMX because the game is fully Japanese on Playstation but completely English on PC. odd.

Tony Hawk's Pro Skater 2 met with a tremendous amount of critical and commercial success. Due to its almost universal high ratings, THPS 2 was the highest rated game of the decade from its release until 2010. As of January 2010, it is the second best scoring video game ever reviewed behind "The Legend Of Zelda: Ocarina Of Time" according to Metacritic. According to GameRankings, it is the twentieth best scoring video game ever.

The PlayStation version of Tony Hawk's Pro Skater 2 has earned Platinum awards from gaming magazine Electronic Gaming Monthly. Because of this, it is the only game in the magazine's history to ever have earned a Platinum award twice (but is only acknowledged as a single game in EGM's records due to the game receiving a 10 from only one reviewer as opposed to the PlayStation game receiving 10s from all 3 of its reviewers). The PlayStation version of the game received a 10 out of 10 from the magazine Game Informer, while the versions for other consoles received lower scores. The Game Boy Advance version received particular acclaim for being an accurate translation of the series. 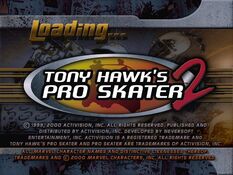 THPS2 loading screen
Add a photo to this gallery

Retrieved from "https://tonyhawkgames.fandom.com/wiki/Tony_Hawk%27s_Pro_Skater_2?oldid=15619"
Community content is available under CC-BY-SA unless otherwise noted.