October 24, 2006
Tony Hawk’s Downhill Jam, or THDJ, is a video game released in 2006 and 2007 on the PS2 version. Tony Hawk's Downhill Jam is a spin-off in the Tony Hawk's series. The game was a launch title for Nintendo's Wii, and is also available for the Nintendo DS, Game Boy Advance, and PS2.

As a departure from Neversoft's Tony Hawk games, Downhill Jam emphasizes gaining speed and racing opponents, as well as competing for high scores and completing goals.

The version of Downhill Jam for Wii was developed by Toys for Bob, developer of Disney's Extreme Skate Adventure and the game adaptation of Madagascar.

As in older Tony Hawk’s games, there are game modes for high scores and completing goals, but a high-speed racing mode is also included. Tricks are used in part to reach secret and alternate routes, although revert and manual tricks are absent from the game. This formula is similar to that used in the SSX series of snowboarding games. The Wii version features a multiplayer mode with four players competing head-to-head in split screen. While online play was announced within early development, the final version of this game does not include online play.

The game does not allow the player to walk off his/her board. The game doesn't include free skate either.

The Wii version of Downhill Jam features a single player mode called "Downhill Challenge". The story to this is Tony Hawk who puts on an event where Tony and friends tour around the world to compete in a series of downhill skateboarding competitions such as:

The Nintendo DS version was developed by Vicarious Visions, who gained much experience with the Tony Hawk franchise by adapting almost every previous version for GBA as well as Tony Hawk's American Sk8land for Nintendo DS.

The DS version has six tracks, each four times larger than a typical level from Tony Hawk's American Sk8land. The DS version has a similar character set to the Wii version, as well as the ability to create a character and customize his or her appearance, stats, and special tricks.

The DS version maintains a traditional Tony Hawk control scheme, and much of the same trick set from Sk8land. However, flip tricks can now be held like grab tricks, reverts are eliminated, and the bert slide has been optimized for downhill racing. Additionally a combo buffer has been implemented. When a combo is broken, the player has a few seconds (a buffer) to start a trick again and save the combo. The player is allowed 20 buffers per combo, making the maximum score of 100 million points per combo still difficult to obtain.

Tony Hawk's Downhill Jam for the DS does not support online play anymore as the servers are not being supported anymore.

The story mode to Tony Hawk's Downhill Jam on the Nintendo DS is called "World Tour", in its story, Tony Hawk and the Custom Skater recruit other characters into Tony's skateboarding crew and compete against a rival crew run by Antonio Segul. During the World Tour, the player has the option to change characters while playing the story mode. In most levels, the player is basically trying to prove Tony Hawk's crew worthy and racing against Antonio Segul's crew. 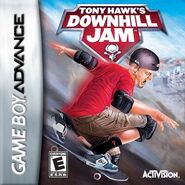 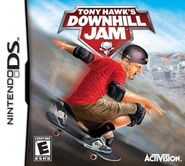