Edit
watch 04:03
Wiki Targeted (Games)
Do you like this video?
Play Sound

October 18, 2005 (US)
Tony Hawk's American Sk8land is the handheld version of American Wasteland. It is the first entry in the Tony Hawk series for the Nintendo DS, and the sixth Tony Hawk video game for the Game Boy Advance.

The top screen is used to display the main gameplay, while the touch screen displays an overhead map of the area the player is currently skating, as well as icons for easily performing tricks. The touch screen is also used to create Skateboard art. Furthering the use of the DS's functions is the ability to record, with the DS microphone, your own sound clips for use in the game.

Tony Hawk's American Sk8land was the first Nintendo DS game released by a third party to support the Nintendo Wi-Fi Connection, the online service for the Nintendo DS. Players are able to play Trick Attack, Score Challenge, Combo Mambo and The Price is Wrong. Players are also able to upload or download graffiti, board art, high scores, and replays to one of the servers, and can periodically download new goals to complete.

The name is shared by the Game Boy Advance version, also created by Vicarious Visions. The GBA version does not share the same graphics, however, having an isometric point of view, polygonal skaters and pre-rendered levels creating a 3D sensation.

The following applies to Tony Hawk's American Sk8land when it is played in story mode. The term 'custom skater' (or 'you') refers to the main character of the story.

Once the Custom Skater has proven his skills to Mindy and other locals, Mindy shows the Custom Skater photos she took of him while the Custom Skater was skateboarding, Tony Hawk then walks up to both the Custom Skater and Mindy and compliments the Custom Skater saying that his skills were impressive. Mindy is shocked that Tony Hawk was standing right next to her and then introduces herself. Tony then notices some sketches that Mindy had on her notebook, Tony then asks if the sketches are for a magazine or something else related to that, Mindy then says the sketches are going to be put in her very own skateboarding comic book that she is hoping to get published one day. She says the name of the comic is "American Sk8land", which is named after Mindy's favorite skateparks. Tony Hawk recognizes the name "American Sk8land" and asks if the skatepark is still around because it got demolished years ago. Mindy says it is around and insists on going to the skatepark. So the three approach an old warehouse where the park used to be held at. Once inside, everything looks run down and Tony remembers some history that happened there and then Mindy insists on rebuilding the skatepark to make it what it once used to be. So the Custom Skater and Mindy set out to make money around Los Angeles to fix up "American Sk8land". While in Hollywood, the two make money and run into Paul Rodriguez and they ask him to help with "American Sk8land", so they head back to the park and Paul lends a skate piece to the park.

This story mode entry is incomplete. Additional information would be greatly appreciated, thank you!

There are 13 songs in the game, some of which were included in American Wasteland.

The DS Version has an integrated online community at http://www.american-sk8land.com, which is designed by Spiral Design Studio and developed/managed by Agora Games. The website shutdown in 2014, following the Gamespy closure.

The website, as well as the networking functionality in-game, would allow the end user to upload/download their graffiti and deck designs. Additionally, you could create 'clans' and sign up with your friend code, publish your best scores for each level and your best times for classic mode speed level speed runs, a feature that pre-dates Tony Hawk's Pro Skater 1+2.

The Nintendo DS version had two forms of multiplayer, being Nintendo Wi-Fi Connection and Local. Both modes were only 1v1 (2 player head to head), but offered a good challenge due to the complexity of the engine.

You can still play online in 2020 thanks to Wiimmfi, a DNS that replaces & emulates the original Nintendo Wi-Fi Connection servers. Additionally, there is a small community that still plays online regularly. 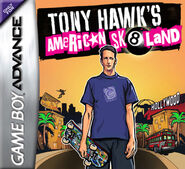 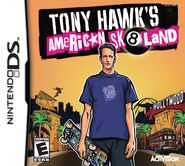