THPS2 E3 Beta is a version of THPS2 presented at E3 Expo dated May 9, 2000. It was distributed in a limited amount for press and was speculated to be available up until its release in 2016 by Sairuk on Hidden Palace.

The hangar in this beta is at a very early iteration, however the shape of the level already matches the final look.

Generally looks finished, except has a lot of details that did not make it to the final version.

No major differences from the final. Secret area is available. No cash in career mode.

The Pit is almost complete in this version, what's missing are the surroundings.

Much bigger surprise is 2P version of the level, since it's a much earlier version, featuring only basic models of The Pit and a lot more outer city surroundings, including the car wash model that would be later used in Los Angeles.

Minor differences. The locked doors do not disappear once unlocked.

Valves to drain the fountain are missing.

Other than being half-textured, no noticeable difference from the final.

There is no helicopter and no finish banner. 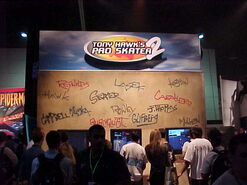 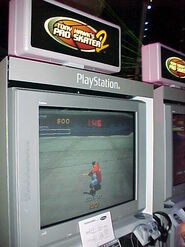 Retrieved from "https://tonyhawkgames.fandom.com/wiki/THPS2_E3_Beta?oldid=15763"
Community content is available under CC-BY-SA unless otherwise noted.