The level itself is a transition of 2 famous skate spots located in Philadelphia, Pennsylvania - FDR Skatepark and JFK Plaza, a.k.a. Love Park (including Fairmount Park Welcome Center).

Visitors Center might be hard to recognize, since it is merged with surrounding buildings in the game.

Aerial shot of the FDR skatepark. 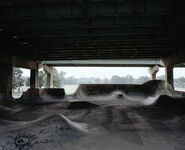 There's nothing in the background, but trees, in real life.

Retrieved from "https://tonyhawkgames.fandom.com/wiki/Philadelphia?oldid=15654"
Community content is available under CC-BY-SA unless otherwise noted.