Paris is an unreleased Tony Hawk's Pro Skater 3 level, that was removed from the game at the development stage. However, this level is still present in Gameboy Color version of the game.

By the time of THPS3 development, Paris was one of the early announced levels and was named "the" level by several reviewers.

According to game files it was meant to be exclusive level for Nintendo Gamecube version, but at a certain point its development was halted.

One of Neversoft developers commented this level on their Facebook page:

"While we can't remember why it was cut. Here's a short description:

Requested by Tony Hawk and Geoff Rowley, this large exploratory level will encompass the Eiffel Tower Banks as well as other famous Parisian skate spots. The banks (no longer around) were located under one of the gigantic steel footings for the Eiffel Tower – providing the perfect dramatic centerpiece for the level.

Lots of skaters use the Trocadero as a local spot, especially the parks on either side of the fountain. The Eiffel Tower is an instantly recognizable landmark, and the Banks are a famous skate spot. The Louvre and Arch are also highly recognizable, but will take some tweaking to make skateable. The catacombs offer a nice contrast to the wet and rainy outside areas.

We started on that level and then abandoned it at some point. I’m guessing the assets for the level still got burned on the disk because we didn’t take the time to clean them out of our game’s tree."

Though the map itself was removed from the game, unfinished level files were found on PS2 disc. For some reason it is called Rooftops in game files. This level can be played in Lost Levels Final mod and LevelMod for THPS3 PC.

Another early screenshot, showing that Eiffel Tower was highly unfinished at the moment.

Level chart. It indicates that Paris was planned to follow Airport. 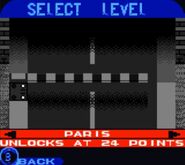 THPS3 PS1 early level roster, having Paris icon instead of Foundry.
Add a photo to this gallery

Retrieved from "https://tonyhawkgames.fandom.com/wiki/Paris?oldid=11806"
Community content is available under CC-BY-SA unless otherwise noted.