The Mat Hoffman's Pro BMX game series is a short-lived BMX-themed video game series, which includes only 2 games. It is known for usage of THPS mechanics and game basics.

Mat Hoffman's Pro BMX is the first game in the series, developed by Runecraft and published by Activision. It uses the Tony Hawk's Pro Skater game engine.

Each biker has two different BMX bikes in the options mode, powerups are added after completing a level. The game also features a create-a-park mode.

Tony Hawk appears in MHPB as a secret character and two THPS levels are unlockable - Warehouse and Burnside.

Mat Hoffman Pro BMX 2 is the sequel to Mat Hoffman's Pro BMX. It is available for the GBA, Nintendo GameCube, PS2, and Xbox. It was part of Activision's short-lived O2 line of extreme sports games. Like the first game, this game uses the game engine from Tony Hawk's Pro Skater.

In N64 version of Tony Hawk's Pro Skater 2 Hoffman Bike Factory level from MHPB is a playable bonus level. PlayStation version of the game provides MHPB Demo whichis available from options menu.  With a little modding one could sucessfully play the level on the PC version of the game.

In Tony Hawk's American Wasteland, Mat Hoffman appears in the game as a playable character, since the game has the ability to ride bikes. He starts out on a skateboard, although the player can switch between a skateboard and a bike only in free skate and story mode. 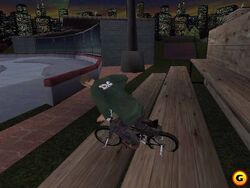 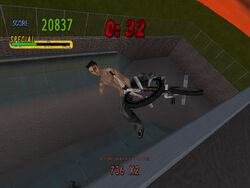 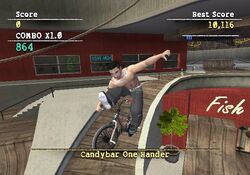 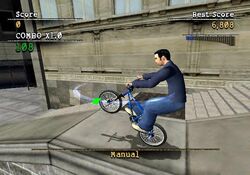 Chicago level in MHPB2
Add a photo to this gallery
Retrieved from "https://tonyhawkgames.fandom.com/wiki/Mat_Hoffman%27s_Pro_BMX_(series)?oldid=15463"
Community content is available under CC-BY-SA unless otherwise noted.