Edit
watch 02:58
No Man's Sky Update - The Loop
Do you like this video?
Play Sound

You can find the English Wikipedia article on Darth Maul here. Alternatively, you can read his in-depth fictional history in Wookieepedia, here.

Darth Maul is featured on Tony Hawk's Pro Skater 3 as a novelty character after completing all 54 goals, and gaining all gold medals on Career mode whilst playing as Tony Hawk. Alternatively, one can enter the cheat YOHOMIES to unlock this character.

Darth Maul is a fictional character that was based off the 1999 film, Star Wars Episode I: The Phantom Menace. In this film, Darth Maul (played by Ray Park) is portrayed as an antagonist, and was well known for wielding a double bladed lightsaber. 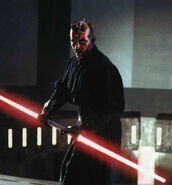 Darth Maul portrayed in the film, Star Wars Episode I: The Phantom Menace.